I've setup my WX station (Maplin version of WH1080) for quite sometime now but since last year, it went down due to few reasons. One of it, because the problem with the intermediary software between the WX base station and aprs server. Anyway, the outdoor unit still out there, transmitting it data over 433.920Mhz freq.

Had a bit of time yesterday, and I've received the BNC to SMA jumper cables that I ordered through Shoppe few days back, so no reason not to go ahead with this. My Raspberry 4 mini-server is under-load anyway, and the RX only multi-coupler given by Weerut has been laying down collecting dust for quite sometime.

What needed to get the SDR to receive the WX data from WH1080 is a software called rtl_433. This software runs on my Raspbian without a problem and it could actually receive many other devices that use 433MHz frequency.

To get started, I was using the instructions found in :

Few things needed to be changed since the rtl_433 has been updated, WH1080 support has changed too. The weewx-sdr won't work out of box. The following changes still not available in the final code.

To be able to send the output into aprs, I'm using the setup that I've had since 2015. This extension is a modified code, not written by me but it works great my setup. My write up on the weewx2aprx can be found here.

My current setup as below ( yes, I'm using multi-coupler for my setup which is connected to Diamond D190). 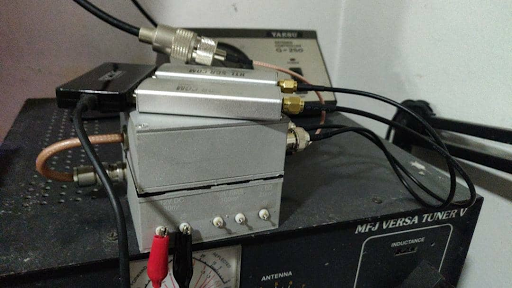 Oh am going to redo the power into the multi-coupler, it kind of dangerous using the croc-clip for it for sure :)

I've setup my WX station (Maplin version of WH1080) for quite sometime now but since last year, it went down due to few reasons. One of...